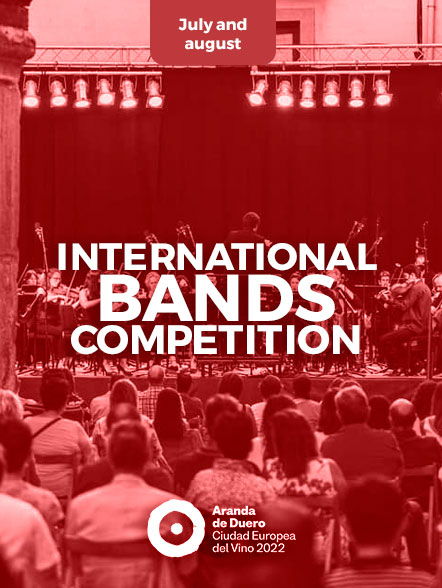 The International Band Competition is a well-established activity in Aranda’s summer programme in which national and international bands compete in live concerts every Friday of the summer.

The stage is located in the iconic Trigo square, surrounded by emblematic buildings such as the “Spanish Village House XVIII”, “Ghost House” and the Palace-house of D. Diego Arias de Miranda. The participating bands must perform two compulsory songs and the rest, of their own choice. In the 2022 edition, these two compulsory themes must be related to the world of wine. There is a technical jury and a popular jury. Three prizes are awarded to the best rated bands and a special prize for the best conductor.

The International Band Competition has acquired great prestige in the circle of musical groups, music schools and conservatories, which places the capital of the Ribera del Duero in a high position in this type of cultural event. In addition, the Contest means the presence in Aranda of musical groups which, in general, have around one hundred musicians.